Have you ever found your boss incompetent? If so, it's probably due to the Peter Principle: every employee tends to reach his or her maximum level of incompetence. Here’s why: employees are promoted based on their performance in their previous jobs until they reach a level at which they are no longer competent, as abilities for one job do not necessarily translate to another. As a result, over time, every position tends to be filled by an employee who is incompetent for the job.

For example, an excellent mechanic is appointed head of the repair shop. His expertise and perfectionism progressively become a disadvantage in his new position as they lead him to go the job of his team and as a result to neglect urgent deadlines or client management. The workshop becomes overloaded, customers complain and his team members are frustrated. As a result, he went from being an admirable mechanic to an incompetent repair shop manager. He has reached his incompetence level as per the Peter principle.

However, this can be avoided. Let’s see how!

Peter's Principle: not everyone is to be promoted

If an employee does his job well, he will be promoted. Therefore, as time goes by, and each time he proves his expertise, he will get another promotion. However, even if he is recognised for a specific expertise, there is no evidence that he has the skills to perform his new function, to be a manager or director. Thus, according to the Peter Principle (defined by Laurence J. Peter, a Canadian educator) not all individuals are to be promoted, since sooner or later they will be promoted for a position for which they do not have the required skills. And once promoted, it will be too late, because nobody is ever downgraded.

Indeed, have you ever seen your manager downgraded in the hierarchy because he or she did not have the expected skills? No, and that's the problem with the Peter Principle. According to this principle, your manager will remain at an incompetent level for the rest of his or her life. Although Laurence J. Peter stated this idea in a satirical tone, this internal promotion mechanism is inadequate because it is based on the candidate's performance in their previous position rather than on their skills and abilities to succeed in their new position. 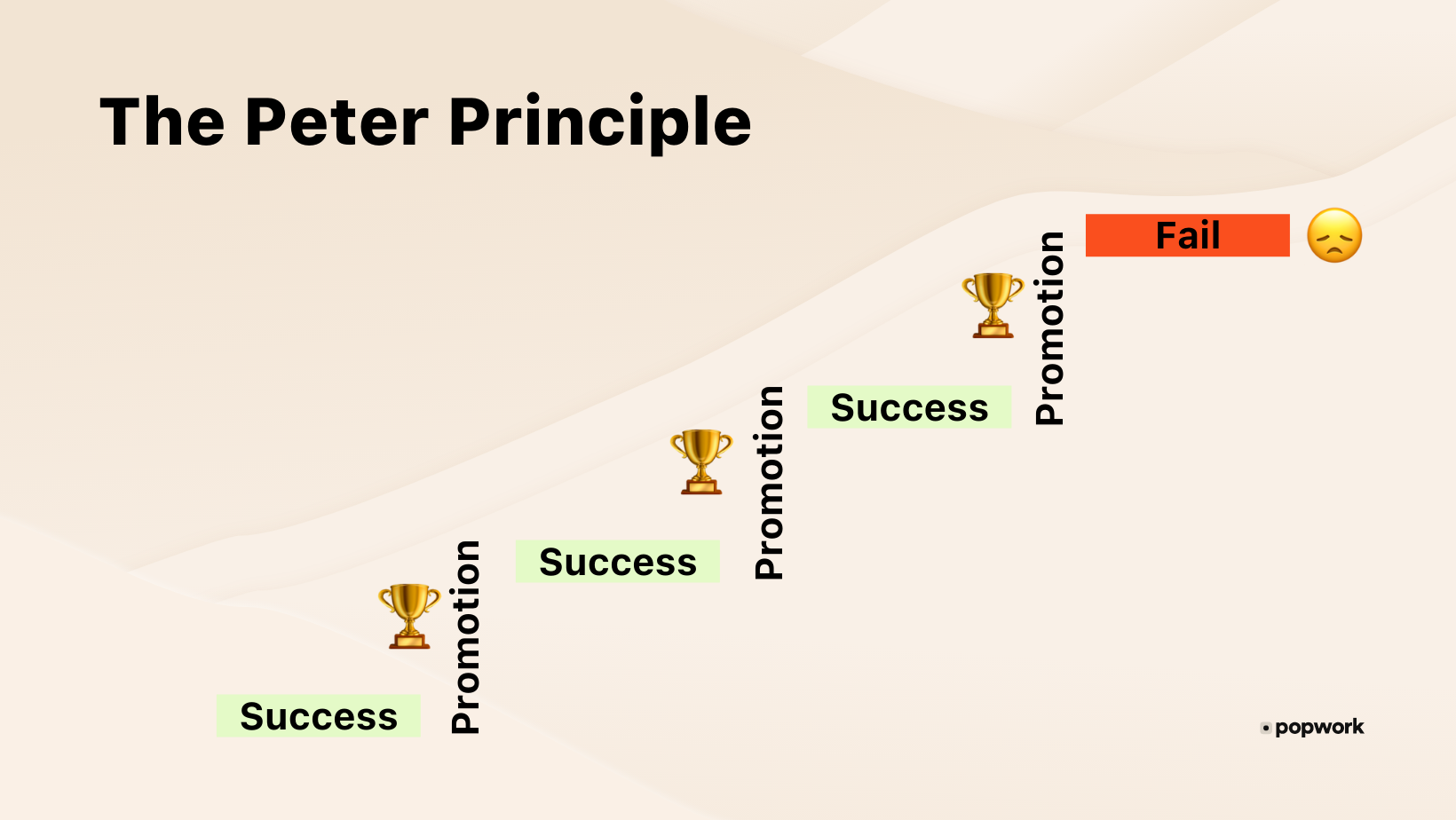 Once managers have reached their level of incompetence, they are no longer productive and can become overwhelmed, stressed and even toxic. Thus, the best salesperson on a team will not necessarily be the best sales manager. This can then impact the entire team: these two positions, although related to the same function, require significantly different skills and qualities.

In addition, more and more employees no longer wish to become managers. The classic internal promotion whereby employees (often "individual contributors") eventually end up managing and leading a team is increasingly being challenged. According to a study conducted in 2019 by the Boston Consulting Group (BCG) and IPSOS among 5,000 employees and managers in five countries (China, France, Germany, the United Kingdom and the United States), the job of manager is becoming less and less attractive. The study shows that the traditional model of internal promotion to managerial positions is increasingly challenged. The problem affects all managers: more than 80% of them find their job harder than before. In France, only 32% of managers surveyed believe that their job has more advantages than disadvantages.

"While they are essential to the success of the company, managers today no longer know what is expected of them and have the impression that they are at the crossroads of all constraints. It is time to rethink their role," explains Vinciane Beauchene, Associate Director at BCG and author of the study.

These new trends invite us to rethink management and promotion models. It also shows that managers and their teams need more support to avoid falling into the trap of the Peter Principle.

Avoiding the Peter Principle is possible!

The Peter Principle is a real issue, but it must be put into perspective. Of course, we all have a level of incompetence, but this level is not definitive if we decide to question ourselves and go beyond it through training, coaching, personal research or even active listening and empathy towards our team. The strengths and weaknesses of each person are not set in stone: on the contrary, we can all improve, consolidate our strengths and work on our weaknesses.

It is a question of attitude and mindset. There are only limits for those who set limits to themselves because of a lack of confidence or who accept them because of a lack of ambition. The manager must therefore be proactive and have the willingness to develop his technical skills but also his interpersonal and emotional skills, also known as soft skills.

The Peter Principle is not inevitable. To overcome it, here are 7 simple but still very effective tips:

To avoid the Peter principle, managers promoted for their technical skills or their seniority will need to take the time to train their management skills, which are essential in today’s environment. Contrary to popular belief, management is not innate; no one is a good or bad manager by nature. Managing a team is not something that can be improvised, but rather learned and requires rituals and methods. You also need to know how to adapt to your team and to the expectations of each of your team members: for example, if your team is more junior, you will need to support them without falling into micromanagement. On the other hand, if your team is very experienced, don't see this as a threat to your own legitimacy but rather as a strength and an opportunity to give them more independence.

Don't forget to listen to your team members, to recognize their skills, to give constructive feedback, to communicate regularly, to create team cohesion and also... to question yourself. Don't reinvent the wheel either and rely on methods (such as SMART or OKR objectives) and simple management tools such as Popwork that have already proven their value to a large number of teams.

Case Study : How does Popwork help the teams of an association like MaVoie?

Since July 2021, Popwork has been used by the teams of MaVoie, a tech association that helps young people enter the job market. MaVoie has grown very quickly and is extremely active in helping young people overcome the impact of the health crisis.…

This productivity should come as no surprise to those who have heard of Parkinson's law. This law is the adage that work expands so as to fill the time available for its completion...…